This is the third blog in a new series I’m working on where I’ll be sending interview-style questions to some amazing bodhrán players. I’m really excited about these, and I hope you all enjoy them!

This post features the amazing Rolf Wagels. Rolf is based in Germany and is a very highly respected and sought after bodhrán player.

I’m so delighted he agreed to do a player profile for my blog. Learning more about how he got started and his approach to his playing is invaluable. I hope you guys enjoy this as much as I have, and a big thank you to Rolf for taking the time to share all of this with us!

I got in touch with the Irish music and the bodhrán through an orchestra exchange in 1988. I was playing French Horn in a youth orchestra and we had several exchanges with Ireland, one to Ballymena, Co. Antrim and later we also with Nenagh CBS band. I heard the music during the first exchange in 1988 and fell in love with it.

I bought my first drum in 1992, a cheap tourist thing. A year later, I met bodhran maker Brendan White at a festival in Germany and got my hands on the drum he had made for himself. This is when I started to play more seriously. I had great support at the local session in Hannover, where I was studying veterinary medicine at the time.

Then things just developed from there, I joined my first band (DeReelium) in 1996, I was asked to teach bodhrán for the German Uilleann Pipes society in the same year. I was travelling to Ireland on a regular basis, especially to Donegal, where I met two Scotsmen, Stephen Campbell (fiddle) and Ian Smith (guitar) who became good friends and we played a lot together. Back in Germany, another band “Steampacket” was formed and we recorded a CD that got some good reviews, even outside Germany and eventually Cara was formed.

I played with the Cara gang for 15 years and recorded seven albums. Cara was a professional outlet, I was the only one who also had a “real” job at University of Veterinary Medicine in Hannover. So, we toured a lot, not only Germany, but all over Europe including Scotland and Ireland, and we were also invited to the US for seven tours. We played all the major festivals and it was great fun. Who would have thought that the little drum would take me around the world?

Parallel to the developments on the band side, I started a workshop series called “BodhranWeekends” in 2001, together with Guido Plüschke, another player and teacher from Germany. It runs twice a year and became the focal point for the German bodhrán scene. It is running in its 18th year now and going stronger than ever.

When the BodhránWeekends turned 10 years, Guido and I released a CD called “Bodhrán Insight”, with liner notes explaining what we trying to achieve in each track, which was received very well in the community.

In 2001 and 2004 I attended the Craiceann summer school on Inis Oirr, Aran Islands. For 2005 I was asked to come back and join the teacher team, which was a great honour. I have been teaching at Craiceann ever since and I got more involved in the organisation of this unique event.

Also, in 2005, I started to collaborate with bodhrán maker Christian Hedwitschak. The result of this collaboration is not only the signature series bodhrán RWE (Rolf Wagels Edition) which features a classic design and specially selected Lambeg skins, but also a close friendship and a lot of developments like the CoreLine series and the university tests which we did a the University of Munich to prove (or not) some of the mysteries of the bodhrán sound and how a maker can influence the sound.

I started to run my website www.bodhran-info.de as source for information about the bodhrán and my workshops and gigs. A shop for all things bodhrán was added soon and now it has a wide selection of quality bodhráns by Christian and tippers by Stevie Moises, plus accessories like drumheads, bags, teaching material and CDs.

Now, that is a tough one. Difficult to nail it down to one person. People say my style is mixture of traditional pulse orientated playing and the more extroverted modern style. This is something I like. Many other bodhrán players have influenced me, among them Brian Morrissey from Nenagh, John Joe Kelly of course, Frank Torpey, Jim Higgins and Junior Davey, who I saw at the Munster fleadh 1996 and was just astonished.

Two players will always be special and inspirational: Seamus O’Kane and Johnny McDonagh. I learned a lot about the pulse from both and they showed me what’s really important in bodhrán playing.

Also, not to forget my band mates, especially Jürgen Treyz who is a living metronome and made me play more precise and exact and all the players that were welcoming in sessions over here and in Ireland.

For me the most inspiring thing are the tunes. “The music” as they say in Ireland. This is always the main thing for me. If I had the time (and the talent) I would not learn another percussion instrument, but maybe the flute or the accordion. I just love the music and a good, well played session full of pulse, lilt and beautiful tunes. 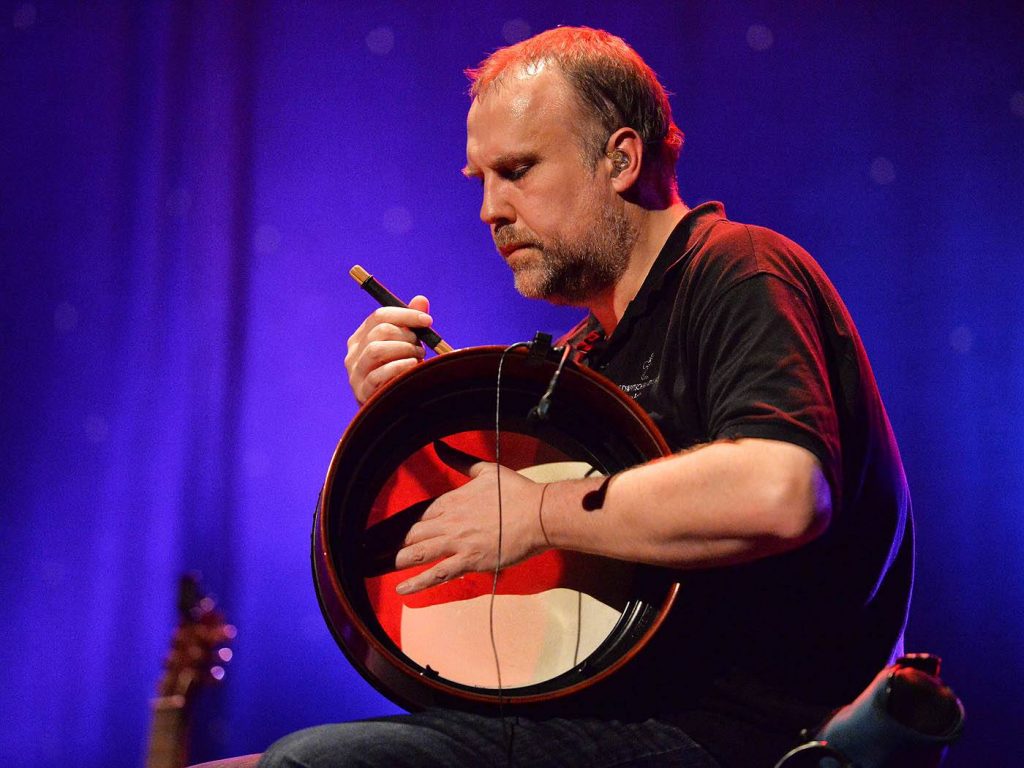 Which bodhrán/sticks/case do you currently use? Tell us a bit about your RWE bodhrán and how that came about and evolved.

The current drum is an RWE, of course. The RWE was developed by Christian Hedwitschak and me. I was looking for a new drum of him but had a few ideas: I wanted a Lambeg skin, I wanted a toolless tuning system. So, we asked Seamus O’Kane, who was kind enough to put us in touch with his Lambeg drum maker and skin provider, Tommy Louden. Tommy provided the Lambeg skins for all RWE drums until is his death in 2017. We still have skins for about 40 drums left, but we are already working on alternative sources for high quality genuine Lambeg skins.

Christian then came up with several prototypes for the toolless system. I am not an engineer or maker, I can just look at things and say: “nope, not good enough yet, it needs more of this or that”. So I drove Christian nuts, but eventually he came up with a smooth and easy to turn system. And that was the first generation of the RWE sorted.

Later, we added new developments, which I like a lot: The compressor tuning rim, which helps to generate a clean and short, punchy base sound, which I personally prefer over a boomy, long lasting bass. It helps a lot on stage, but also in a session environment.

The latest additions are the ChangeHED system in the RWEchange, which allows to change head and tuning rim and the IsolatHED technology, which allows the tuning rim to be the only component still in direct contact with the drum skin. Again, this helps to achieve a cleaner sound. A lot of engineering work and testing in the sound laboratory of the University of Munich went into all this.

So currently I play the RWEchange, use mainly the HR5 by Stevie Moises, but also a great selection of this tippers, like the brushes, the MellMo and some click tippers and the RWE snake wood tipper, which again is collaboration of Stevie Moises and myself. I am using a Protection racket case and a Shure beta 98 H/C microphone on stage.

Another drum I took to in recent times is the Rebellion drum, a Red Wave model. With its specially treated Remo head, it gives a lot of tonal variation to an amount I never thought was possible with a synthetic head and the added bonus is the tunings stability. The easy handling when changing to any 14” drum kit head also makes it interesting for me.

Not sure if it is unique…😊. With Cara I had the challenge to play tunes and songs. Now, tunes were something I was used to, but to replace a drum kit in a song was something I needed to learn from scratch. But my main love are the tunes, see above. I need to connect to the tunes and the melodies and pick up phrases and the pulse of tune.

If you are starting the bodhrán because you love the tunes, listen to the tunes as much as you can. Try to understand the lilt that is in the tunes, learn the tunes so that you can at least sing, lilt or whistle the second part if you hear the first part. You need to know what is going on in the music.

Apart from that, practice is important of course. And fun while playing. But the connection to the music is the key for me. You might find joy in drumming along to a session, but once you are really part of the music and the session, the real fun begins. It will bring deep enjoyment and goose bumps…to me anyway, even after 26 years of playing.

There are many great resources out there to learn, including this blog. You can learn all the techniques, but again: For me it’s all about the music. Connect to it in your playing and interact with the tunes and the players!

If you’d like to learn more about Rolf and see what he’s up to, you can find him at his website or over on his Facebook page. 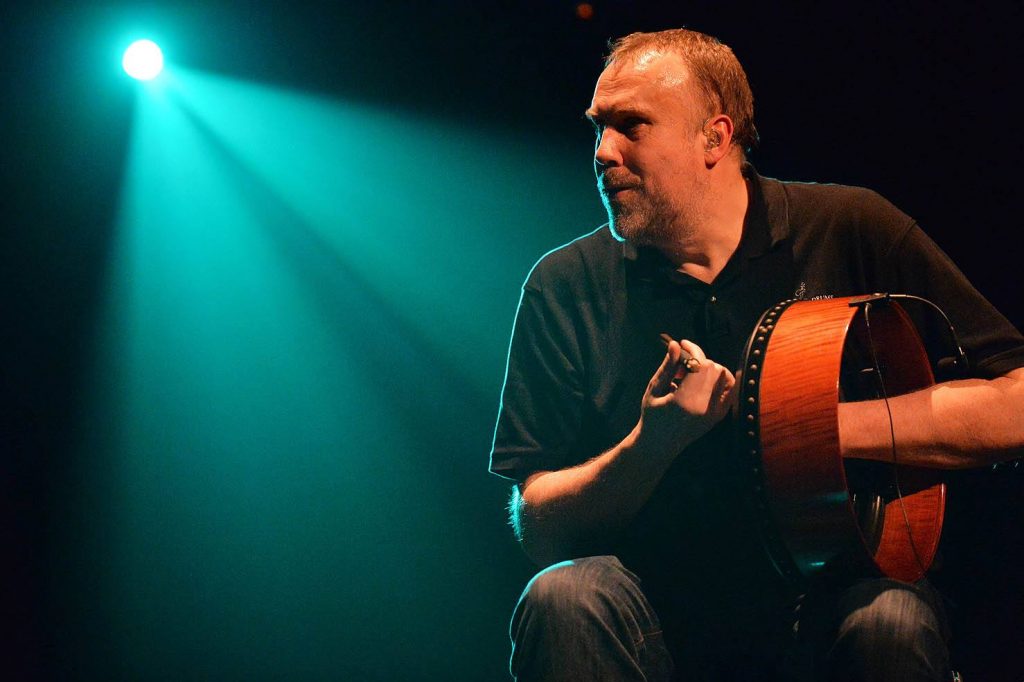