This is the first blog in a new series I’m working on where I’ll be sending interview-style questions to some amazing bodhrán players. I’m really excited about these, and I hope you all enjoy them!

First up is David Foley. I’ve known David for a long time, and we both lived and played in Glasgow at the same time for several years. He’s an awesome musician who also plays flute and guitar, and is most known on the Scottish Folk scene these days for playing the bodhrán with RURA.

I’m so happy to have him as the first player profile here on my blog and really appreciate him taking the time to share his insights with us. I hope you guys enjoy, and I can’t wait to bring you some more of these.

When I was a kid my parents would take me to music summer schools in Ireland in the summer, chiefly the Joe Mooney Summer School in Drumshanbo, where I’d take part in whistle and flute workshops through the week. After a few visits my dad decided to pick up the bodhrán and go to classes himself. He enjoyed his lessons so much on our way home we stopped by Seamus O’Kane’s house and he bought himself a drum. Anyway, my gameboy ran out of battery not long after we left Seamus’s and as a result I spent most of the journey home working out how to play the bodhrán.

I think writing music with other musicians and bands has shaped my playing a lot in recent years. Heart and soul though, Martin O’Neill imparted a grounding in that has stuck with me. It’s something of a less is more/being flashy is for dicks approach. It’s something I learned from him as a student but also something I recognise in his playing.

That’s a hard question. Inspiration, for me, comes and goes. I play a few instruments so I’ll be all about the flute for four months then I’ll be like “The guitar is pretty cool.” and then only play that for ages. The one sure thing to inspire me bodhrán wise is watching John Joe Kelly. He’s pretty much inspired every bodhrán player worth their salt performing today, and after all that he is still the best.

I can’t say I’ve had many struggles with my playing. But that may just be how I approach learning on the instrument. I’m quite chilled out in the way that if I can’t get a certain technique or rhythm or whatever I just put the drum down and try again later. It’s important I understand something new before I try to play it, or else it generally doesn’t work out. Knowing that it might take time makes things less of a struggle too.

I use two sticks. A hot rod I made from kebab sticks when I was sixteen years old and a brush/hardstick hybrid made by Bud Clarke. I believe the brush has two siblings, one in the care of Marissa Waite and the other with Martin O’Neill. I use the hot rod basically all the time though. I can’t remember the brand of case I use… the one with the bald guy on the logo.

I’ve never felt that my playing is unique. My only real platform for my bodhrán playing is with RURA and how I play in that band could maybe be seen to be “my unique style”. But really I’m just bouncing off/going along with/trying to compliment the ideas from the other band members, especially the guitar.

Best piece of advise to learners would be to get to know the drum. When you’re practicing – move your hands around. Try hitting the skin in a different place, keep changing it up, but BE AWARE. Listen for the best quality of sound. If it was good, try to remember what it was you did. If it sounded crap, you know not to do it that way. Here’s a mantra for you. If you are conscious that everything you play is informing your understanding of the instrument – all those times it sounded naff are actually pointing you in the right direction. But you have to be aware of what you’re doing. Think it through. If you’re not aware you’re just an idiot hitting a dead goat with a stick.

Where can we find you online?

You can find me at my incredibly out of date website www.davidfoleymusic.wordpress.com/. 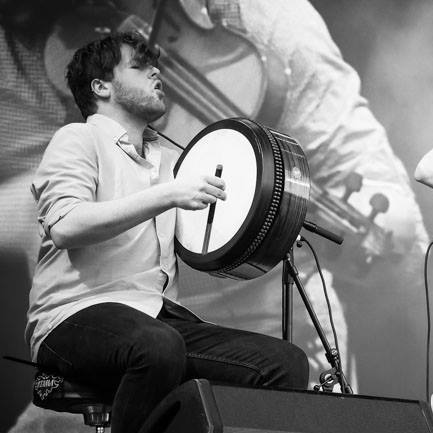