This is the second blog in a new series I’m working on where I’ll be sending interview-style questions to some amazing bodhrán players. I’m really excited about these, and I hope you all enjoy them!

This post features Callum Younger, a brilliant young bodhrán player based in Glasgow. Callum has a really unique bodhrán/drum kit setup and is doing some amazing things with it. His playing is incredible to watch!

He’s put so much thought and time into my interview questions, I think you guys will enjoy this as much as I have.

I was first handed a bodhrán when I was 16. I had played kit in a few different bands and my father had a ceilidh band, he gave me a bodhrán and told me, that if I had could play it the following evening, I would get free beer and £50….. it didnt take much to persuade me.

However, at the ceilidh, I started exploring the drum whilst keep timing. And quickly found that by manipulating the tension of the skin there were (what it seemed like), bass notes. Then I was hooked ever since. I might add that it being such a portable, versatile drum that was way easier to carry around than a full drum kit may have prompted me in the early days! But since then, I have kind of just been addicted to exploring the possibilities of the drum.

This one is complicated.

My approach to playing and even thinking about the bodhrán is heavily influenced by all kinds of drummers and bodhrán players. I shall briefly outline some of the key inspirations, but it is but the tip of  the iceberg really and I can’t list everything!!

Joáo Mendes and Andrés Fuzeiro both studied with me at University. It is from them where all my inspiration to work hard, learn as much as possible and be creative as a player comes. All I learnt from them changed everything of how I perceive music and the instrument itself. I am indebted to them.

Cormac Byrne has inspired me to look past the drum itself and challenge myself to be the best drummer I can be. His playing, creativity and wealth of rhythmical knowledge is utterly astounding. He is without a doubt one of the best educators on the instrument, and i was extremely fortunate to have him as my main tutor at University.

Ronan O’Snodaigh is a huge inspiration. First bodhrán player to explore double strokes. I mean. Enough said. His understanding and approach to music are just incredible.

Martin O’Neill and Aimee Farrell Courtney – I’ve grouped these incredible players together as they inspire for the same reason.

Tone. Pure joyous, amazing tone of the bodhrán in their hands.

Both make the bodhrán sound incredible with their individual playing styles.

Influencers who do not play Bodhrán:

Adam Stapleford is probably the best drummer I have ever had the opportunity to meet and play with. His understanding of rhythm and apporach to playing just leaves me in awe. Adam inspires me to study harder, to explore in my playing and put in maximum effort into everything.

Brian Blade inspires me like no-one else. He paints the drums. There are very few drummers who can express themselves like he can. Just an incredible, humble musician who really has passion for drumming.

Ustad Shahbaz Hussain – Flawless, incredible tabla player who looked outside of his genres and created new bols (stroke techniques) for the tabla. Opening up possibilites through creative adaptation inspires me as much as his incredible control and mastery of rhythm.

Dave King – He just gets it. And by that,  I mean Drumming.  Life. Music. Art. Passion.

My bandmates – From Pons Aelius, RUNN, HAC and Trio FCT. Each member of these musical projects has influenced me in so many ways and pushed me to be better.

I listen to a lot of genres, and artists. Usually I will hear a kit player achieve something amazing with four limbs, and that inspires me to see how much I can achieve with the bodhrán-kit. Recently, I have begun playing with two hands – simply because I love polyrhythms and the trance like state you get into trying to play two seperate rhythms at the same time. Listening keeps me inspired but it has to come from the right intentions…. I’d rather learn a groove over fills or instagram chops anyday.

Each new territory of playing presents struggles. I guess you just get used to overcoming them step by step so they don’t feel so overwhelming. I think learning how to break down problem areas was an essential skill to learn early on.

Right now, controlling upstrokes on the snare drum and trying to play them as ghost notes has me bloody shouting daily. But, patience and practice have taught me that, I will be able to get there and finally, maybe one day, play the purdie shuffle on Bodhrán-kit!

I use a Hedwhitschak COREline Bullet. It was originally a replacement for a tour until I got my MON reskinned. But the COREline drums are great and I just stuck with it.

Sticks – I cut down drumsticks for two reasons:

Cases – My mother has a company making items from harris tweed, so I usually rock the cases she has made me. But honestly, I use anything I can get my hands on. Recently, with touring, I that using a 40 litre Berghuas, you can fit a 15’’ snare drum and a COREline Bullet. So I strap my hardware ontop. It makes it about as light as a person, but at least I can carry it on the train!

I wouldnt say unique, but in my playing i like to push what i thought was possible. Then once I’ve tried something exciteing, I move on to something else. What I am passionate about is seeing bodhrán players really explore creatively. When we just immate others’ in our playing, we aren’t furthering the music scene, finiding your own style is important but ulitmately I want to see and hear bodhrán players taking risks. I like to take risks in my playing, using cymbals and a snare drum for instance, so i suppose that could be classed as unique. But I’d rather more bodhrán players started to try it, because you will be suprised at how simple but effective it can be!

First to others. Always listen when you are playing in a session.

Then listen to yourself. Pull apart you playing and judge what can be better. Its a hard practice to get used to but to improve we have to anaylse our mistakes, detaching yourself from it emotionally is key.

Go for a walk,

Put a metronome on,

Listen to the world and the pulse play off each other.

Pons Aelius are finishing work on their second album, due to be released in September. They’ve had a great response from their fans so far and are just looking for a bit more funding to help with promotion and artwork. You can see their Indiegogo campaign here. 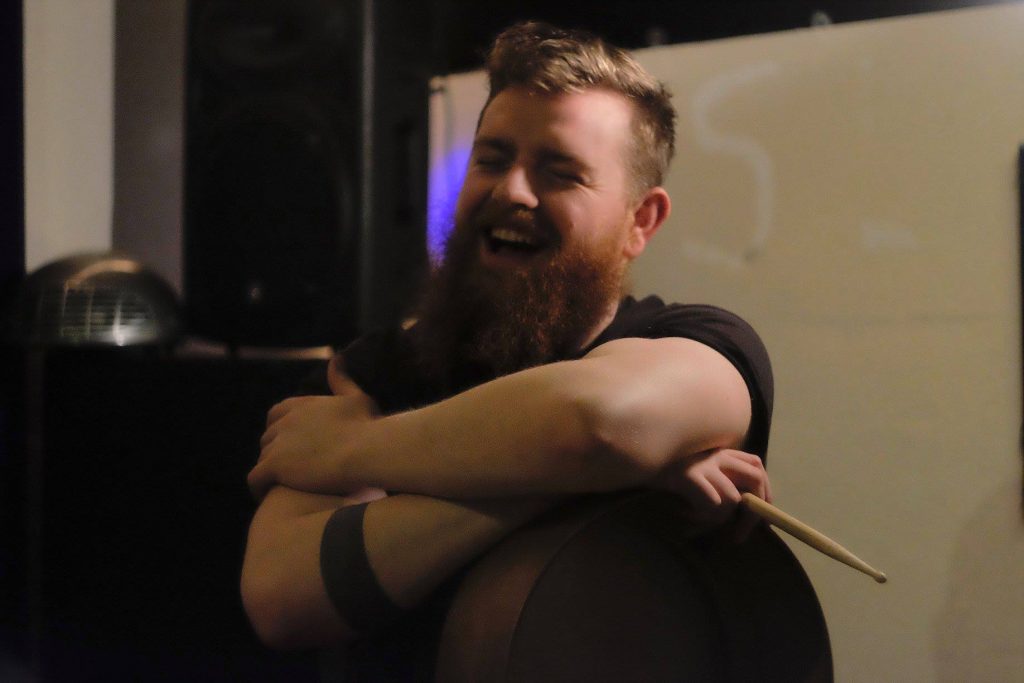