This post features awesome bodhrán player Craig Baxter. Craig is a great player based in Glasgow, and these days is well known on the Scottish Folk scene for his playing with Gnoss.

I’m so happy Craig took the time to write this up for us, a big thank you to him for taking part! His playing is really lovely and it’s great to hear his perspective and his approach to his music.

I began playing bodhrán about 4 years ago when I was 16 or 17. I started out as a pipe band snare drummer from the age of 9, so I spent most of my teens playing in pipe bands, competing and playing at concerts, parades, tattoos and that sort of thing. While I loved it (and still do), I wanted to try something different and started listening to a lot of folk and trad music, and was drawn towards the bodhrán and always wanted to take it up. Eventually I bought one when I was about 15 and got a lesson with David Foley, but due to school exams and pipe band commitments it fell by the wayside. I didn’t really start in earnest until a year or so later when I got some more lessons from Martin O’Neill and started to actually play and practice regularly. Around this time I successfully applied to study on the trad music course at the Royal Conservatoire in Glasgow, so this really helped push me on and gave me something to work towards, as I wanted to be able to get involved in more trad music as much as possible rather than just stick to snare drum and pipe bands.

When I started at RCS, I just went to as many sessions as possible as well as playing in various classes at uni, and also with the band TRIP, which started out with a few of my pals in my year who shared a kitchen in our halls of residence. So by the end of my first year in Glasgow I’d come on a lot and bodhran had kind of taken over from snare drum as my first instrument. A few months later, just before I started back at RCS, I joined the band Gnoss. The guys in the band had been playing together for a couple of years already before I joined, so it was great for me to join a band that already had an established sound and way of doing things. We also recorded an EP soon after I joined so I got my first real experience of recording as well, and that was all a big learning curve and great experience to gain. In the last couple of years since then I’ve been lucky to do a fair amount of gigging and recording with both bands, as well as other bits and bobs for other bands and artists such as Madeleine Stewart, Finlay Macdonald, Project Smok, Brighde Chaimbeul and Jamie Murphy and Iona Fyfe. I was also part of the 2018 version of the RCS band Ùr, which goes out to Celtic Colours Festival in Canada every year. I really enjoying getting to play with so many different musicians, as there are so many different styles and ways of playing within what is considered such a ‘niche’ genre, so I learn a lot from every band or musician I get to play with, which is probably my favourite thing about playing bodhran!

I’ve taken influence from so many players, but my main influence would definitely be Martin O’Neill. He gave most of my first few lessons and is now my tutor at RCS so I’ve learned most of what I know from him. As well as all the basics and technique, I’ve taken so much inspiration from his approach to grooves and especially the accuracy of his tone, and how methodical and disciplined he is as a player and have tried to implement this into my own playing too.

Another big influence would definitely be John Joe Kelly. I’ve always listened to tons of Flook, Mike McGoldrick and wherever I can find him playing on other albums or Youtube videos. I just love the energy and power in his playing, as well as how disciplined and solid his parts are. Jim Higgins would be another player whose style I love and try and take things from too. I’ve always listened to lots of David Foley and Adam Brown’s playing in Rura and Imar and their various other projects, as well as at sessions around Glasgow since moving here, so they would be another big influence. I’d also say other drummers/percussionists like Greg Barry, James Mackintosh and Erik Laughton have really changed my perspective on how I approach my bodhran playing despite being kit players. They’re all very subtle and musical players in their own ways and I love listening to them perform. I could go on for ages as there are too many great players to mention but I’d say those are my main influences!

I try and listen to as much music as possible – I’m a bit of a geek for listening to tons of trad music as my friends will tell you, but I find it really helps for picking up ideas from hearing different styles of accompaniment whether it be from bodhran players, other percussionists or piano/guitar players. I’m also lucky to get to play with and listen to so many different musicians at gigs and sessions around Glasgow so take lots of inspiration from hearing them all play. 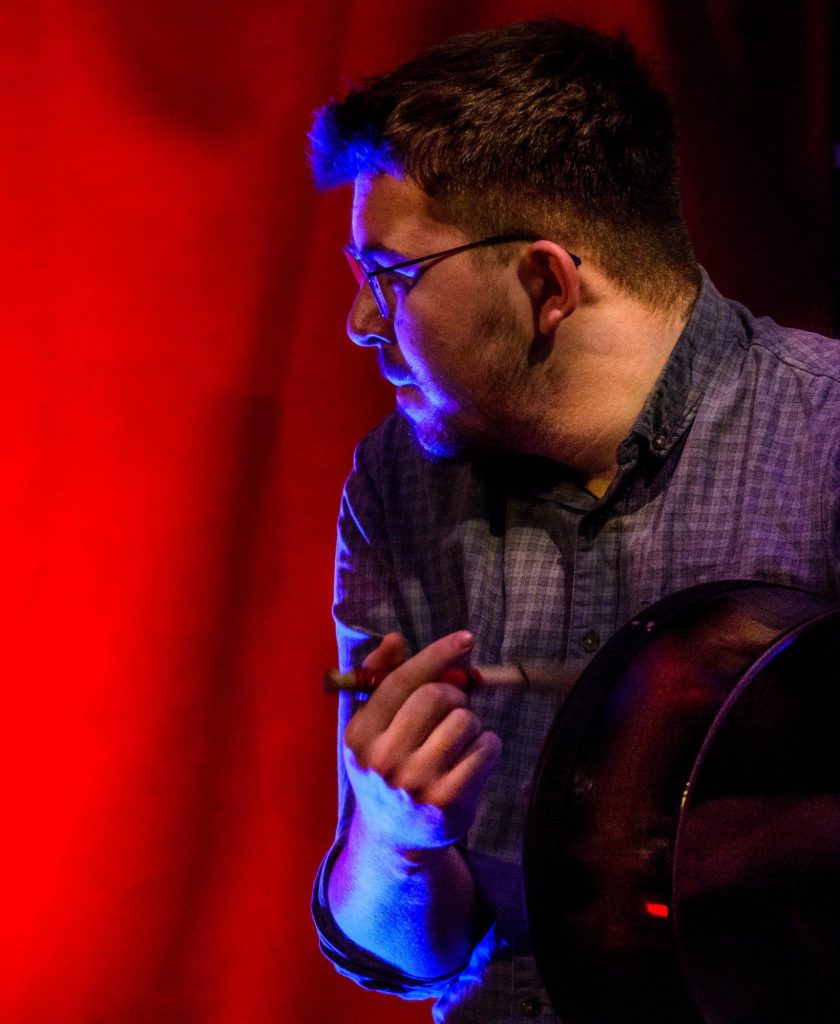 I think when I was starting out and was used to pipe band drumming (where the drum score is constantly changing and following the tune) I struggled to stay disciplined and stick on one groove, and found myself constantly wanting to change up what I was doing. I found it hard to restrain myself and just stick to one thing. I had a few lightbulb moments after listening to myself back and realising I was just getting in the way by trying to show off and chop and change all the time, so I have tried hard to be more disciplined since then!

I play a MONss by Christian Hedwitschak and mostly use two of Martin’s MONster stick series too. I always loved the sound Martin got from his drum, especially the tonal range in the low end of the instrument, and find it consistently gets a great sound at gigs and when recording. I keep meaning to add another drum or two to the collection but haven’t got round to it just yet!

I think I’ve got quite a good ear for picking out bits of tunes/grooves and can react to other people I’m playing with pretty well. I think my playing is pretty musical and (hopefully!) doesn’t intrude too much to whatever I’m accompanying, and I try and make sure I always play with lots of energy and drive as much as possible! I’m not sure if those are particularly unique qualities but those are the things I try and stick to when I’m playing.

Spend plenty time getting really solid on the basics and play as much as you can with other people at sessions or wherever. I think it’s also just as important to know melodies of tunes as it is for a melody player, as this really helps you get a feel for what type of grooves suit certain tunes and generally comes in handy especially when playing with people you might not have played with before. Also, try and listen to as many different styles of bodhran playing, as well as other drummers/ percussionists as you can, and figure out the way you want to play and what your own sound is as a bodhran player. Most of all, just enjoy your playing and go for it!